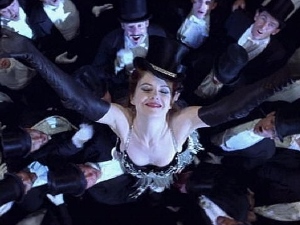 A lonely writer falls in love with a singing, dancing courtesan in this bawdy musical that soars on the charms of co-stars Nicole Kidman and Ewan McGregor. The song numbers cannibalize lyrics from love songs over the past century, an approach you’re either going to love or hate. I think the musical sequences are the best part of Moulin Rouge!, whether it’s the Tex Avery cartoon quality of “Spectacular Spectacular” or the climactic production of “Hindi Sad Diamonds,” which is presented on a scale we haven’t seen since the days of Cecil B. DeMille. And the idea of turning The Police’s “Roxanne” into a tragic tango is nothing short of brilliant. “Moulin Rouge!” is ultimately an acquired taste, where the frenetic style of director Baz Luhrmann is either a revelation or an assault on the senses. Personally, I marvel at Luhrmann’s color palette, staging, and uncanny ability to marry sight and sound into cinematic spectacle. The only thing I find difficult to endure is the way his films are edited, sometimes quick and choppy enough to induce nausea. If you can watch the “Can Can” sequence in Moulin Rouge! and not get queasy, then you’ve got one up on me. The film rightfully won Oscars for art direction and costumes, and Nicole Kidman was nominated for her performance as Satin, the “Sparkling Diamond.”