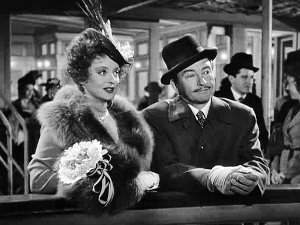 Bette Davis stars as a woman who marries a banker (Claude Rains) to protect her brother from embezzlement charges. Claude Rains’ character knows full well that she’s marrying him for his money, but hopes that in time she’ll grow to love him. Well… she doesn’t. Bette Davis is a cold-hearted bitch in this movie, so all your sympathy goes to the long-suffering Rains, whose performance is easily the best thing about Mr. Skeffington. A few decades and a child later, Davis gets old and sick and finally (finally!) begins to love poor Rains, but it’s too little too late. Mr. Skeffington is a strange film for trying to swing Davis’ character back into the audience’s favor so late in the game, and the two-and-one-half hour run time is bit much for such an intimate drama — but Davis and Rains almost make it worth your while (although some of Davis’ performance feels like a precursor to Whatever Happened to Baby Jane?).