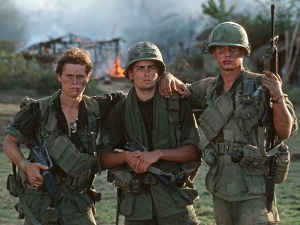 Oliver Stone’s Platoon was one of the first major motion pictures to deal with the Vietnam war. Charlie Sheen stars as an infantry volunteer who finds himself in a moral quandry, torn between two sergeants of differing philosophies. Tom Berenger and Willem Dafoe give solid, Oscar-nominated performances as the two sergeants, but it’s the director’s voice that comes through most strikingly in Platoon. As a Vietnam veteran, Stone paints a picture of war where loss of one’s humanity is worse than dying. Stone’s not known for subtlety, and Platoon often feels like poetry jackhammered into rock. The death of a major character plays almost like The Crucifixion, and the whole movie is marinated in Samuel Barber’s emotionally manipulative Adagio for Strings. It may be a little overbearing at times, but Stone’s heart is in the right place. Platoon won Oscars for Best Picture and Director. With Keith David, Forest Whitaker, and Kevin Dillon.