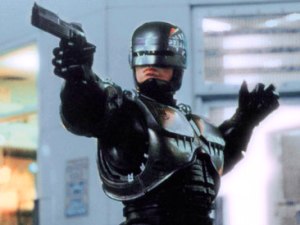 In the not-so-distant future, a Detroit policeman is murdered by a vicious cop-killer, only to be resurrected as the ultimate cyborg law enforcer. But will RoboCop have free will, or will he be slave to the corporation that facilitated his rebirth? On one level, RoboCop is an action film sprinkled with generous amounts of extreme violence and gore. But the movie also has unexpected depth and emotion. The exploitative elements, ghastly as they may be, are firmly rooted in a character arc with which we identify – officer Alex Murphy’s quest to regain his humanity. The film spends relatively little direct attention on this emotional foundation, but the quality of those moments hoist the film above audience expectations for the genre. RoboCop is an exploitation movie… with heart.

We only know Murphy (Peter Weller) for a few scenes before his violent murder at the hands of cop-killer Clarence Boddicker (That ’70s Show‘s Kurtwood Smith). Director Paul Verhoeven (Total Recall, Basic Instinct) chose to portray the moment so violently, that the Motion Picture Association of America made him trim some shots in order to avoid an X-Rating. Verhoeven’s use of gore elicits sympathy for the character, a crucial element that is difficult to achieve when the character’s “death” happens so early in the story.  In other words, the gorier the murder, the more we hate Boddicker and the more we empathize with Murphy.  Since the movie is also a revenge story, it’s important that the inciting incident be a memorable one and worthy of justifying another ninety minutes of pursuit.

You might compare RoboCop to another popular cyborg of the time – The Terminator. But the Terminator was never human. It achieves its objective precisely because it lacks any human emotion. Upon resurrecting Murphy as a cyborg, the powerful Omni Consumer Products corporation celebrates his Terminator-like design — a machine, in both body and mind. But when fragments of his former life return to haunt RoboCop, the corporation panics. To serve their purposes, they need Murphy to be a machine. This conflict of corporate greed over human need permeates the film, and helps it work on an entirely other level, that of social satire.

Officer Lewis (Nancy Allen) tries to find the man in the machine.

Verhoeven begins to nudge the audience into a satirical interpretation when OCP’s first mechanical monstrosity, ED-209, goes berserk at a corporate meeting and kills an innocent employee.  Once again, Verhoeven relies on extreme gore, but this time with the intention of pushing the movie into comic mode.  ED-209 shoots the employee so many times and with such tremendous force, there is nothing but a bloody mess left on the table before the droid is shut down. The CEO of the corporation then turns to the droid’s creator and says, “Dick, I’m very disappointed.”

Verhoeven reinforces this satirical interpretation with the movie’s many “media breaks”, television news spots bumpered with zany commercials. The commercials, including one for the “Nuke ‘Em” family board game, seem to poke fun at the salience of consumerism in our daily lives while also warning us of the dangers of capitalism run wild. Is “Nuke ‘Em” really what the world needs?

In the world of RoboCop‘s script, consumerism leads to the unraveling of social order. Omni-Consumer Products owns the police force, a plot-point that creates a conflict of interest between the officers’ duty to the community and OCP officials’ private interests. When RoboCop discovers Clarence Boddicker is being paid by OCP officials to murder people, our hero is physically incapable of arresting them — attempting to do so results in “shutdown”, a piece of Robo’s programming installed by OCP. (These elements of satire are still relevant in 2009, as our own government continues to protect certain corporations (tobacco, oil) in exchange for hefty party donations. There’s also controversy surrounding certain cities’ decisions to adorn cop cars with Nascar-like advertisements.)

The “media breaks” also feature’ glib commentary of horrific and highly emotional events. In the first media break, the grinning newscasters (one of them is Leeza Gibbons for goodness’ sake) wish the best of luck to a recently wounded police officer. Verhoeven then cuts to a scene in which we learn the police officer has died.  By showing us horrible events such as Murphy’s death, and then showing us the innocuous “media break” coverage of those events, the filmmakers provoke debate over violence in the media.  The old journalism adage, “If it bleeds, it leads”, still holds true.  We are told over and over that violence exists and permeates our society, so much so that we may become immune to it.  But seldom do we explore it or confront it.  Verhoeven, who experienced bombs landing in his front yard during the second World War, does not hide from violence.  He shows it, and more importantly, he shows its effects.  RoboCop spends over half the movie dealing with the aftermath of death and violence, struggling to shed his machine identity and reclaim his humanity.  “What’s your name, son?” asks the Old Man at the end of the movie.  That Robo answers “Murphy” is a testament to the movie’s thematic integrity.

That an action film could be filled with so much subtext is something to celebrate.  But to be executed so brilliantly makes it a masterpiece.  The key ingredient, of course, is Paul Verhoeven, whose visceral and highly kinetic style make for a truly exhilarating ride. The performances are led by Peter Weller’s restrained and subtle execution of the namesake character, but supporting players have plenty of time to shine in the ensemble. Nancy Allen (Dressed to Kill, Carrie) holds her own as Murphy’s partner and RoboCop’s strongest ally. Ronny Cox (Beverly Hills Cop, Deliverance) and Miguel Ferrer are entertaining as sparring OCP employees, while Daniel O’Herlihy’s Old Man is icing on the cake.  It’s Kurtwood Smith’s Clarence Boddicker, however, that steals the show.  Smith brings Boddicker to deliciously evil life, creating one of cinema’s most memorable villains.

Jost Vacano’s photography is scintillating, washing the film in vibrant colors.  Rob Bottin’s RoboCop costume is magnificent, and could have derailed the entire film if it wasn’t believable.  Phil Tippet’s stop-motion animation is also noteworthy.  Younger generations may scoff at such old-fashioned methods of bringing monsters to life, but I see true artistry in the movements of Tippet’s ED-209.

Perhaps my favorite artistic contribution is Basil Poledouris’ score, which ranges from the eerie and emotional to pulse-pounding and bombastic.  The main theme manages to encapsulate the heart of the movie with it’s underlying machine-like percussion and more human melody struggling to rise above it.  The music to the van chase is particularly stunning, piercing our ears and forcing us to respond in an almost primal way, like a defense mechanism against a musical assault.  The music accompanying Murphy’s death is also exquisite – spiraling slowly and tragically out of control as medical teams try to revive him, finally reaching a terrible plateau, the musical equivalent of a flat line.

There’s a running joke in RoboCop.  Whenever anyone’s watching television in the movie, the same program is always on.  Whether it’s while people are snorting cocaine, while they’re killing, or while they’re robbing stores – Verhoeven cuts to TV screens featuring a Benny Hill– type character, always surrounded by sexy women, proclaiming in a loud, goofy fashion, “I’ll buy that for a dollar!”  The fact that this joke appears throughout the film begs a question, even if it is silly or obvious:  Just what is it that we’re buying for a dollar?  Sex? Gore? Violence? Entertainment? I’m not sure the answer is as important as the question. Characters in the movie always seem to laugh when it’s asked, even during the most appalling situations.  Maybe it’s a litmus test, and we’re not supposed to be laughing. RoboCop does function as a cautionary tale — don’t let corporations get too powerful, don’t lose your humanity, and don’t buy everything just because it’s a dollar. Then again, it could just be a joke. In a movie so rich with subtext and detail, I enjoy considering the possibilities.

RoboCop is one of those rare movies that many people enjoy for many different reasons, a mainstream hit with critical praise on the side. The success of its wide appeal lies first in Ed Neumeier and Michael Miner’s intelligent script, one that operates at different levels, but always on an entertaining one. It’s a simple story told in a complex way, directed by a visionary director and supported by a team of incredibly talented collaborators. Don’t let the title scare you –  RoboCop is one of the most brilliant science-fiction films of them all.