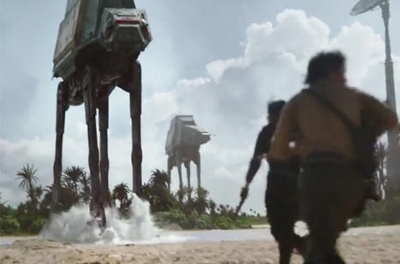 Rogue One is the first of what is sure to be many stand-alone or spin-off Star Wars movies over the next few decades. This maiden venture focuses on the events leading directly into Episode IV: A New Hope, with a young woman trying to redeem her father’s coerced invention of the Death Star by leading a rag-tag team of freedom fighters into hostile Imperial territory to steal dear old dad’s hidden plans. The plans, of course, are the ones that Princess Leia tucks inside R2-D2 at the beginning of A New Hope, so you kinda already know how Rogue One ends. But that won’t interfere with your enjoyment of the movie.

No, the tedious boredom is what will interfere with your enjoyment. Rogue One has the stench of a film hastily written and re-written to make a premature deadline. The first 90 minutes are an absolute chore to endure. Plot points, myriad locations, fleeting characters all collude in an unnecessarily labyrinthine fashion, desperately trying to untangle itself into something audiences will enjoy. I was literally looking at the tivoli lights in the theater auditorium at times, because they were more interesting than what was happening on-screen. After the first 90 minutes, Rogue One finally lets loose with some action and an over-reliance on nostalgia to swing audiences’ final verdict (by all counts, it appears the film’s final act was largely re-shot to this effect). And while fanboys may eat up all the Imperial weaponry on display, I found it to be too little, too late.

The new characters in The Force Awakens had personality and on-screen charisma, enough to carry that film’s tired storyline across the finish line. But you’ll find precious little of that here. Felicity Jones and most of her co-stars are wildly lacking in screen presence and the script isn’t one that gives them much to work with anyway. Alan Tudyk’s robot character has by far the most emotional impact on the film — he elicited both laughter and tears from me, but I’m a softie for robots. There’s a blind ninja wizard character who is hard to not like, but he’s two-dimensional. And beyond that, no one registers at all.

I had high hopes that director Gareth Edwards (Monsters) would knock action sequences out of the park with this movie. I loved how he gave the thrills and suspense in Godzilla a unique perspective and poetic grace. But the action is less expertly rendered here, much more haphazard — like what you’d find in any Marvel movie. It lacked beauty.

Rogue One is nearly devoid of human emotion and narrative push, so I found it next to impossible to get engaged with it. I would have loved to see a Star Wars movie finally embrace a dark, mature tone and deliver a sublime, tragic ending. This is a half-assed attempt in that direction. As popcorn-munching spectacle, it pulls its butt out of the fire in the last thirty minutes. If explosions don’t interest you, your love of A New Hope might carry you through the final act, as the story becomes more and more enmeshed with that film. But cameo appearances from the original trilogy aren’t enough to make me forget the first unforgivable 90 minutes or the dreadfully boring leading characters.

‘Star Wars’ goes ‘Shock Waves.’ But this isn’t even in the movie.