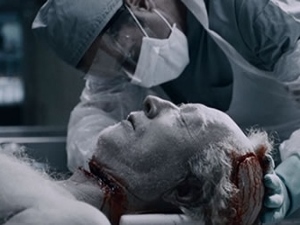 The fourth Saw film isn’t nearly as clever as it tries so desperately to be, and the death traps for which the series is so famous are woefully uninspired. The movie also deflates the mystique of its central character, Jigsaw, by giving him a cheezy, cliched back story. Director Darren Lynn Bousman shows a knack for imaginitive scene transitions, but everything else about this movie’s execution stinks to high hell. I needed a Dramamine after enduring Bousman’s relentless shaky-cam and rat-a-tat editing. Barf.