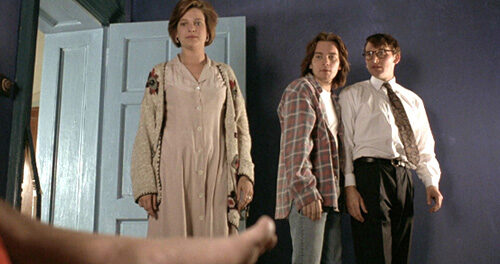 Danny Boyle (28 Days Later, Sunshine) made his feature film directorial debut with this claustrophobic crime thriller about three flat mates who discover their fourth flat mate has died… and left a million dollars in a suitcase under his bed. They bury the body and plan to keep the money, but are soon torn apart by paranoia and jealousy, especially when burglars come looking for the money and the buried body is discovered by the police.

The film also marks the feature film acting debut of Ewan McGregor, who plays the giddy schemer of the group. Christopher Eccleston plays the flat mate most haunted by their actions, while Kerry Fox plays the mediator between them. There’s an understated love triangle going on, but no allegiance can be trusted — all three are corruptible and capable of betrayal.

The film is well made and effective enough to have launched Boyle’s career — one of the careers I have most enjoyed over the last few decades. But on an emotional level, the movie holds me a bit at arm’s length. The characters are never very likable or sympathetic, so I never fully invest in what they’re doing. To some extent, I don’t really care what happens to them because they deserve whatever they get. But the cast give good performances and Boyle makes the most of the film’s intimate constraints. The final ten minutes feature some reversals and surprises that make for a satisfying ending.