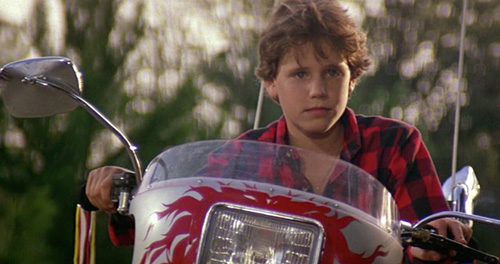 Corey Haim (The Lost Boys) and Megan Follows (Anne of Green Gables) star as young siblings in a small town where a series of grisly murders takes place. Follows’ character is jealous of all the latitude her wheelchair-bound brother gets, but the two begin to bond when they discover the identity of the killer — and that he’s no ordinary human, but a werewolf. Can they convince their boozing uncle (Gary Busey) to help them before they become the monster’s next victims?

Silver Bullet is based on a short story by Stephen King and is the only feature film credit from Emmy-award winning TV director Daniel Attias. It’s a not an especially stylish piece and the synthesized score sometimes dates the film in unfortunate ways, but there’s far more good than bad going on in this fun little flick.

What makes it work more than anything else are the three main characters and the performers behind them. Haim and Follows are competent child actors, and this is quintessential Gary Busey here — drinking, cussing, laughing, and upsetting the grownups while delighting the children. Busey adds a ‘wish fulfillment’ dimension to the movie, because who doesn’t want a fun, crazy uncle like Gary Busey? There’s an added layer of poignancy and nostalgia from the film being narrated by Fellows’ character at a much older age. Everett McGill is memorable as the town’s preacher. The gore is kept to a minimum, but Carlo Rambaldi’s werewolf transformation special effects are second only to An American Werewolf in London.