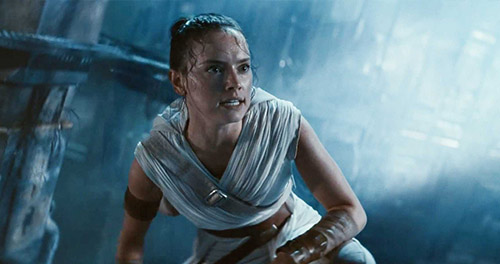 It’s best to go into The Rise of Skywalker knowing that this third Star Wars trilogy has never had a strong guiding hand. It’s not the result of a carefully premeditated creative effort. Creator George Lucas was not there watching over everything for these three films — and for good and for bad, it shows.

Episode 9 is the result of a studio panicking from fan outrage over Episode 8. It’s a course correction to less sophisticated and less subversive storytelling and a return to more fan service. This kind of compromise may sound like a recipe for disaster, but for filmmaking so commercial and desperate to please as many people as possible, I have to hand it to Disney, Lucasfilm, and director J.J. Abrams. They make it work for the most part.

The more interesting bits of the storyline risk spoilers, so I’m leaving those out. But as a backdrop, I think it’s relatively spoiler-free to tell you that Rey (Daisy Ridley) is training with Princess Leia (Carrie Fisher) to be a Jedi while her buddies Po (Oscar Isaac) and Finn (John Boyega) ride the Millennium Falcon here and there avoiding the First Order (the new Empire) and searching for clues on how to defeat them. Meanwhile, Kylo Ren (Adam Driver) has become the First Order’s Supreme Leader and is having clandestine meetings with Emperor Palpatine (back from the dead, or maybe he never died?) Palpatine wants Kylo to bring him Rey while the rag-tag rebels have to prepare to do battle with Palpatine’s new enormous army of star destroyers.

The Rise of Skywalker is probably the fastest-paced of all the Star Wars movies. It’s a lot to take in. I can imagine an extended cut of the movie working a little better. But it’s not hard to follow and most of it plays really well. There are several well-done action set-pieces and welcome humor scattered throughout. One tiny, new puppet character got a lot of laughs at my screening. C-3PO and Chewbacca are treated more like full-fledged characters than they’ve treated in a long time. Adam Driver and Daisy Ridley are given a lot to work with and give commendable performances. I’m left feeling that the trilogy never fully tapped into the character potential of Finn and Po — but it is fun to see them reunited with Rey for much of the film.

Apparently George Lucas was right all along: maybe these films really can’t withstand serious drama or nuance. The Rise of Skywalker is decidedly less interesting, original, and sophisticated as The Last Jedi. But as another chapter in a long-running, popcorn-munching, crowd-pleasing space opera, it still delivers the goods.