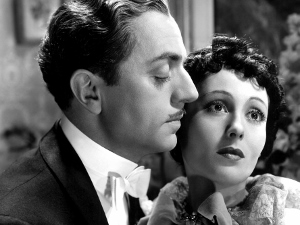 This early Best Picture Oscar winner is a three-hour mix of song, dance, and narrative, much like Broadway Melody before it. I was expecting a real stinker, especially when the opening credits revealed “Fashion Parades by Adrian”. But apart from being overly long and anachronistic, it wasn’t so bad. The narrative is fashioned loosely around the life of Broadway’s legendary Florenz Ziegfeld Jr (the Ziegfeld Follies), beginning with his first successful ‘Strong Man’ act at the 1983 Chicago World Fair, then into his Broadway ups and downs, and finally (and sentimentally) to his death. The film commits so much time to show-stopping song and dance, that when it decides to focus on the Ziegfeld biography in the final 20 minutes, it feels like too little, too late.

Fortunately, the song and dance numbers are an even mix of remarkable and bizarre, so much so that they really do carry the film over the rough pastiche of Ziegfeld’s life. The big centerpiece highlight of the movie is the number “A Pretty Girl is Like a Melody,” a lengthy number featuring dancers, musicians and models on an enormous, rotating set that looks something like a wedding cake. The sequence is captured in one, uninterrupted take, moving slowly up the cake to reveal new players and exotic costumes as it rotates before the camera. Some of the modeling and dancing is unintentionally hilarious by today’s standards, and whenever Adrian does indeed bring on a fashion parade, you’re in for some bewildering sights.

William Powell stars as Ziegfeld and does a fine job up until the sappy ending. Myrna Loy comes late in the story as his second love, Billie Burke (yes, the same one who played Glinda the Good Witch in The Wizard of Oz). Luise Rainer impressed audiences as Ziegfeld’s first love, Anna Held. The Academy handed her an Oscar for best actress (and she’d win another just one year later for The Good Earth). Speaking of The Wizard of Oz, the wizard and the scarecrow, Frank Morgan and Ray Bolger, are also part of the cast. Bolger’s carefully controlled but seemingly clumsy moves in The Great Ziegfeld predate Oz‘s “If I Only Had a Brain.” Morgan is amusing throughout the film as Ziegfeld’s greatest friend and rival — and he makes the ending more tolerable than it would be otherwise.