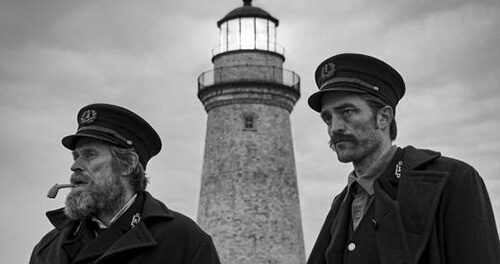 Movies like The Lighthouse sure don’t hit the multiplex very often. Hot off his astounding debut feature, The Witch, writer/director Robert Eggers’ sophomore effort is a horrifically surreal pitch-black comedy about two men going mad in a remote lighthouse in the 1890s. Robert Pattinson, distancing himself from Twilight fame with increasingly remarkable performances, plays the younger of the two sea dogs. His character is berated and humiliated by the older, crustier man, played by the ever-award-worthy Willem Dafoe, who refuses to let Pattinson’s character into the top of the tower to see the light — literally and figuratively. What’s up there, in tandem with Dafoe’s storytelling, drinking binges, and growing paranoia, is what the movie’s all about.

The Lighthouse is a parallel experience to The Witch in many ways. Both films deal with characters in confinement and the struggle to determine what’s real and what’s paranoid delusion, and both films are aided immensely by the masterful work of cinematographer Jarin Blaschke and composer Mark Korven. The Lighthouse carries The Witch‘s pervasive atmosphere of dread and boasts as many horrifyingly surreal moments (ever seen a man fuck a mermaid?) But where The Witch strings you along one lane of perception and then gleefully commits to another — a master stroke of genius, in my opinion — The Lighthouse remains ambiguous and somewhat unresolved. In other words, at least to my mind, less satisfying.

But what movie wouldn’t pale in comparison to The Witch, one of only three perfect 10’s I’ve given in the last 19 years? See The Lighthouse for the sheer audacity of a black-and-white 4×3 aspect ratio film in this day and age. See it for Dafoe and Pattinson in two pretty extraordinary performances. Enjoy the dread, enjoy the immersion. Enjoy the absurdity and don’t be afraid to laugh.