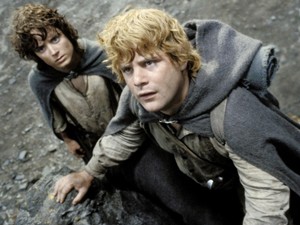 Peter Jackson (Dead Alive, The Frighteners) embraces the Herculean task of bringing Tolkien’s supreme fantasy to the silver screen, and hits a home run. The Fellowship of the Ring gets the trilogy off to a strong start, as Frodo Baggins and his companions set off to destroy the One Ring.  Jackson is faithful to the source material while masterfully balancing action, horror, heart, and humor in the epic storytelling. The casting is perfect, especially Ian McKellen as Gandalf, Sean Astin as Samwise, and Ian Holm as Bilbo. I’m also fond of Dominic Monaghan and Billy Boyd as Merry and Pippin, but there’s really not a sour note in the entire ensemble. To create the creatures and environments of Middle Earth, Weta Digital combines computer graphics with the oldest of visual effects techniques, including some rare and stunning use of large miniatures. Howard Shore enriches the film with a dynamic score that is at turns ominous, reverent, and heartbreaking. The screenplay adaptation is remarkable in its ability to unfold a complex plot, paying equal attention to character development and action set pieces. Most important of all is that this high fantasy contains some genuine human emotion — even if it’s found in the likes of elves, dwarves, and hobbits.

The middle chapter in the trilogy, The Two Towers, is slightly less satisfying on its own, mired in tangled plotting and sparse with spectacle. Unless you’re a real fan of the story, the first two-thirds can be difficult to get through, but the last hour more than makes up for it. The Battle of Helm’s Deep and the Ents’ march on Isengard are as spectacular as anything else in the trilogy. The acting ensemble grows to accommodate new characters.  Most notable are Bernard Hill as King Theoden, Miranda Otto as Eowyn, David Wenham as Faramir, and Brad Dourif as Grima Wormtongue. Outshining them all, however, is Gollum.  Middle Earth’s favorite split-personality is achieved through the on-set performance (and voice) of Andy Serkis and the animating prowess of WETA Digital. The result is a CGI character more compelling than any that have come before it.

Jackson concludes the trilogy with the Best Picture Oscar-winner, The Return of the King.  From the bloody fields of the Pelennor to the fires of Mount Doom, The Return of the King over-delivers on action and thrills, but it’s also an emotional experience. As visceral and entertaining as the trilogy is, there’s something haunting about the way it ends, in the idea that there are tribulations which mark us, experiences so damaging that we can never go home again.

The Lord of the Rings gives me pause every time I finish watching it.  Its beauty overwhelms me, the nobility and sacrifice of its characters move me to tears, and its cinematic achievement — for fans of the art form — is nothing short of monumental.