Two small children run for their lives from a murderous preacher in the only film actor Charles Laughton ever directed. The Night of the Hunter is a unique blend -- part fable and part thriller, both pastoral and horrific, a beguiling mixture of qualities that usually mark the work of an amateur... or a genius. Laughton is as precise and purposeful as Orson Wells (even using Well's cinematographer from The Magnificent Ambersons), but there's also a naive, experimental quality to the film, in the way he mixes realism with German expressionism, and solemnity with odd moments of Tex Avery-style comedy. 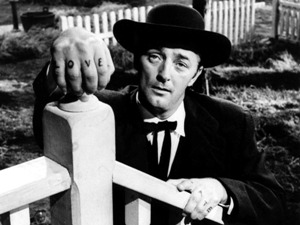 There are a few moments where the stylistic clash jars me a little, but the film is an otherwise rapturous, gorgeous, cinematically inventive, and genuinely uplifting film. Robert Mitchum as the evil preacher is perfect casting — he’s terrifying when the film calls for it, and darkly comic when he gets his comeuppance. He meets his match in sweet but stalwart Lillian Gish, whose character takes in wayward children and isn’t afraid to pick up a rifle if anyone threatens them.

The Night of the Hunter is a hell of a film. Whether you watch for enjoyment or a deep appreciation of film as art, prepare for a smorgasbord. With Shelley Winters, James Gleason, and Peter Graves.