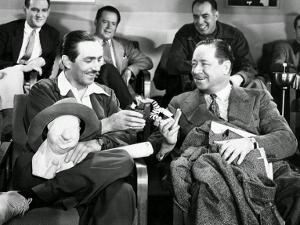 The Reluctant Dragon is an odd but interesting hybrid of anthology feature and behind-the-scenes documentary. It’s about a man whose wife convinces him to take a children’s storybook titled The Reluctant Dragon to Walt Disney so that he can make it into a new cartoon. Once the man, humorist Robert Benchley, arrives on the Disney studio lot, he continually evades his tour guide and sneaks into all the various creative departments on the lot.

I enjoyed seeing behind-the-scenes footage from the making of Dumbo and Bambi, both in production while this film was being made. Highlights include a sequence showing foley artists creating sound effects for Dumbo and a bizarre musical performance featuring Clarence Nash and Florence Gill as Donald Duck and Clara Cluck, respectively. The story department also walks Benchley through an entire storyboarded sequence called “Baby Weems”, while the animators give him a private screening of a Goofy cartoon entitled “How to Ride a Horse.” Finally, Benchley meets Walt Disney himself, who takes him to a special screening of their latest cartoon… The Reluctant Dragon. The twenty-minute cartoon, about a prissy dragon and an erudite knight who’d both rather recite poetry than fight each other, closes out the feature presentation.

I enjoyed The Reluctant Dragon more than any other anthology Disney movie. The fact that part of it is in black & white and part is in technicolor makes me feel like it was a cost-saving, experimental film. But for a movie fan like me, getting to take a guided tour of Disney Animation circa 1941 is a real treat.