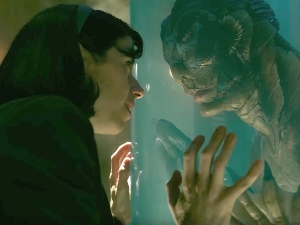 Guillermo del Toro serves up a fantasy love story set in the 1960s in which a mute janitor at a top-secret research facility falls in love with… well, a fish man. Sally Hawkins plays the janitor and Doug Jones (a Del Toro regular) plays the fish. Hawkins is endearing and Jones is always reliable, but the supporting players outshine them here. Richard Jenkins is great as Hawkins’ gay roommate, a man whose failed attempts at love lead him to aid Hawkins in her plight to rescue the fish man before the military carves him up. Michael Shannon is memorable as the corporate suit charged with overseeing the creature’s containment and demise. Octavia Spencer has plenty of screen time as Hawkins’ work buddy, but she’s mainly there for comic relief and to speak for her mute counterpart.

I love Guillermo del Toro’s work and have enjoyed every single one of his movies, particularly Pan’s Labyrinth, Pacific Rim, and Crimson Peak. I enjoyed this one as well, but I was honestly a little disappointed that I didn’t enjoy it more. The film is gorgeous to look at and Del Toro always captures moments of pure magic in his films. But I felt The Shape of Water begged to be shorter and more taut.

Del Toro chooses to sophisticate Jenkins’ and Shannon’s roles much more than I expected, and Spencer also has a sequence to shine on her own. It’s mostly a good thing to see these side characters fleshed out, but that’s three separate storylines that detract from the central love story. There’s even a fourth line involving a scientist (Michael Stuhlbarg) and Russian spies. For a movie that’s supposed to be a love story between two characters, we end up spending at least half the movie with a bunch of other people.

At two full hours and change, The Shape of Water felt overly long to me. There’s one exciting sequence in the middle of the film in which the good guys work together to rescue the creature from the facility. Prior to that sequence, the film moves slowly toward the inevitable rescue scene. And after that sequence, there’s an arbitrary ‘ticking clock’ device set into play that doesn’t work well enough to give the storytelling any sense of urgency. With brevity and an injection of urgency, I think I might have regarded The Shape of Water as a new masterpiece from the maestro.