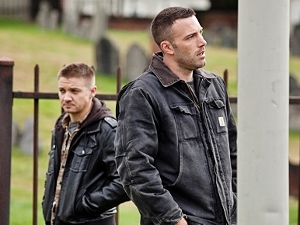 Ben Affleck stars in and directs this drama/thriller about a bank robber who falls in love with the manager at a bank he recently took down while he plans his next heist and evades the FBI. Affleck is a solid director, especially in the film’s heist and chase scenes, but The Town lacks a bit of the tension and thrill found in his earlier films Argo and Gone Baby Gone. That’s partly because The Town is decidedly a far more intimate story that spends a significant amount of time on the romantic relationship between Affleck’s character and the bank manager, played very well by Rebecca Hall. At first it bothered me that so much of the film hangs on a woman who falls in love with a man who earlier robbed her at gunpoint and in disguise. But once Hall’s character is let in on the plot device, The Town gets more genuine and involving. Overall, the movie is sort of a Heat wannabe, complete with cat and mouse game with a side order of romance. There’s even footage from Heat playing on a TV set at one point in the movie. The Town is no Heat, but it’s a pretty solid, smaller-scale variation on that theme. Jeremy Renner is memorable as Affleck’s partner in crime (playing a part like Val Kilmer’s in Heat). The supporting cast includes Jon Hamm, Chris Cooper, and Pete Postlethwaite.