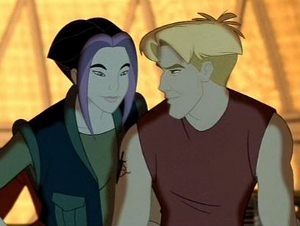 Titan A.E. is an awkward mix of 2D and 3D animation from director Don Bluth (Secret of NIMH, Anastasia). It’s not as attractive as Bluth’s other films, and it also suffers from a weak script. There are kernels of dramatic potential, especially with humanity being on the brink of extinction, but the film is more concerned with conjuring arcade-like action and music video moments. The story would have gained substantial thrust if the protagonists’ primary mission was to find a new home for humanity. But this is presented as an afterthought in the film’s climax — too little, too late. Another major narrative flaw is with the underdeveloped villains, the Drej. I know they’re bad, but why? It would have helped if they had a shred of personality, too. There are a couple of snazzy visuals, some cute dialogue by co-screenwriter Joss Whedon, and a good voice cast, but Titan A.E. ultimately fails to engage. With the voices of Matt Damon, Drew Barrymore, John Leguizamo, Nathan Lane, Janeane Garofalo, and Bill Pullman.