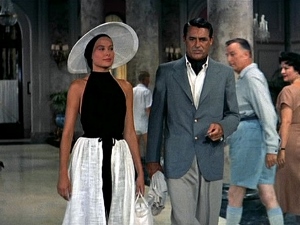 Cary Grant stars as an ex-jewel thief trying to clear his name after precious jewels start disappearing in the French Riviera. This outing for Alfred Hitchcock succeeds more in character than in suspense set pieces, though you’ll get some of that, too. Grace Kelly plays a socialite who falls in love with Grant, even though she suspects him of stealing her mother’s jewels. The mother is played by scene-stealing Jesse Royce Landis. It’s particularly amusing when Kelly turns against Grant, but the mother takes his side. The film features a healthy dose of comedy, memorable supporting turns from Brigitte Auber and John Williams (returning after a terrific performance in Dial M for Murder), and Oscar-winning color cinematography from Robert Burks.
Academy Award: Best Cinematography
Oscar Nominations: Best Art Direction, Best Costume Design (Edith Head)