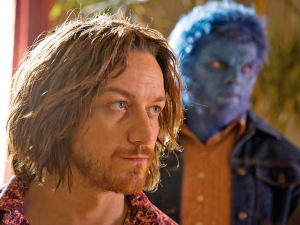 X-Men: Days of Future Past brings back most of the cast from the Bryan Singer films (X-Men and X2) and merges them with the cast of Matthew Vaughn’s First Class for a storyline involving time-travel and the mutants’ desperate attempt to correct an error in 1973 that would, fifty years later, lead to annihilation for both mutants and humans alike. Simon Kinberg’s screenplay puts Wolverine (Hugh Jackman) front and center, sent back in time by the powers of Kitty Pride (Ellen Page) to unite the younger versions of Professor X (James McAvoy) and Magneto (Michael Fassbender) to stop their mutual love interest Mystique (Jennifer Lawrence) from assassinating Dr. Bolivar Trask (Peter Dinklage). Trask is the inventor of the Sentinels, giant flying robots designed to target and destroy mutants. But if history remains unaltered, they actually end up destroying humanity as well.

If you love Singer’s X-Men films and Vaughn’s First Class, you’ll love this one, too. I thought it utilized its large ensemble of well-loved characters extraordinarily well and builds to a solid third act that features cross-cutting action between Sentinel battles in both the past and the future. That third act is also surprisingly emotional, taking you right to the brink of every single character’s utter demise before showing the faintest glimmer of hope. Singer has always known the power of the X-Men is in character, and he proves it here once again.

Besides Jackman’s Wolverine, the film also belongs to McAvoy, Fassbender, and Lawrence, all on their A-game. Since both men pine for the blue shape-shifter, the dynamic among them is continually surprising. Fassbender strikes a terrific balance in a tricky role — he’s still Charles’ friend, but no less the bad-ass Magneto needs to be. The balance of power in this trio becomes the crux of the Act Three climax.

Wolverine enlists the help of Hank McCoy and Charles Xavier to find Mystique.

Nicholas Hoult (Warm Bodies) gets ample screen time reprising his role as Beast, while Patrick Stewart and Ian McKellen reprise their roles as older Professor X and Magneto in the apocalyptic future. Other actors make the most of their smaller roles in the film, including Halle Berry as Storm, Shawn Ashmore as Iceman, and Daniel Cudmore as Colossus.

There’s one new character who steals the show: Quicksilver. He’s played by Evan Peters (American Horror Story, Kick-Ass), and even though he’s only in a few scenes, one of them is hands-down my favorite in the entire movie. Maybe it shouldn’t be a surprise that in a dark film about total annihilation, the biggest reaction from the crowd comes from a comic spectacle. A truly inspired sequence — look for it when Quicksilver helps Wolverine, Charles, and Beast break Magneto out of his underground Pentagon prison.

Quicksilver watches as Eric and Charles square off.