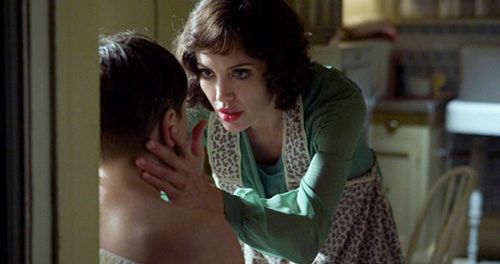 Angelina Jolie stars in this gripping true story about a woman in 1920s Los Angeles whose young son vanishes without a trace one afternoon. When the L.A.P.D. notify her they’ve found him, she’s shocked to discover the returned boy is not her son. Despite teachers and doctors agreeing with her about the new boy’s mistaken identity, the police won’t continue the search for her son. When she goes public about the police’s mistake, they force her into a mental institution where she discovers other innocent women are suffering under the police department’s label of ‘insanity’. Meanwhile, an activist priest (John Malkovich) tries to clear her name and a serial child murderer (Jason Butler Harner) is on the loose!

Changeling threw me for a loop before I was even a half-hour into the movie. It’s deeply unnerving to watch Jolie’s character forced to take care of a boy she knows with every fiber of her being isn’t her son. The anxiety level climbs even higher after she’s institutionalized, forced to take medicine she doesn’t need and threatened with electric shock therapy. The film gets even darker when the police conspire to cover their tracks in the wake of Jolie’s public statements, and the killer’s young accomplice begins to confess their crimes.

Director Clint Eastwood keeps you glued to the screen and on the edge of your seat for most of the film’s run time. By the time the climax draws near, you’re eager to see Jolie vindicated and the police exposed, to say nothing of the lunatic killer. The final twenty or thirty minutes get a little wobbly. After the story is largely concluded, the movie keeps going… to Jolie’s attempt to begin a new life, to her witnessing the killer’s execution, and to the discovery of another boy who escaped the killer’s grasp.

Changeling has trouble finding the right way to end, but it’s a damned interesting tale told by a master director and an actress at the top of her game. Malkovich is a breath of fresh air and Amy Ryan is also memorable as a prostitute who stands up for Jolie in the hospital. With Colm Feore and Jeffrey Donovan. Screenplay by J. Michael Straczynski (Babylon 5).