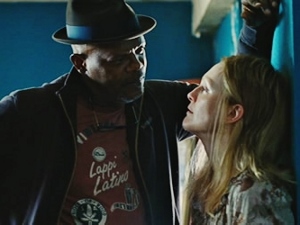 Samuel L. Jackson and Julianne Moore star in this clunky mystery about a New York detective tasked with prying information from a distressed woman whose toddler was kidnapped in a stolen car, while also trying to prevent an escalating race riot. Yeah. Freedomland is a hot mess of a movie. Jackson’s two objectives don’t seem to have any connection to one another and the result is a movie fighting to find its identity. You’ll see major revelations coming a mile away, and then you’ll be puzzled by what to take away from the movie when it’s over. Julianne Moore, one of my favorite actresses ever, is terrible in this role. She’s playing a bereaved drug addict, so I understand the justification, but her hysterics become cloying quickly. There’s a compelling sequence in the middle of the movie where volunteers fan out and search for the missing boy at an abandoned children’s institution, where supporting player Edie Falco has one hell of a scene with Moore, but aside from this sequence and Falco’s terrific performance, there’s little else to recommend here. With Ron Eldard and William Forsythe. Directed by Joe Roth (a studio exec who took over after the original director left the project).