Disney's Frozen borrows ideas from Hans Christian Andersen's The Snow Queen and follows closely in the footsteps of Tangled before it, but it's also a bit more. For one thing, there's an interesting sister dynamic at play here. One royal daughter, Anna (voiced by Kristen Bell), is the care-free sort, while the older daughter Elsa (Wicked's Idina Menzel) is born with a curse - the power to turn things into ice. After a childhood display of her magical powers nearly kills Anna, Elsa hides herself away for fear of hurting anyone. That's all prelude. The story proper takes off when Anna inadvertently upsets Elsa on her coronation day. When the citizens of Arendelle discover their queen is a sorceress, they freak, she freaks, and a hard snow comes to fall. Elsa flees the kingdom and builds an ice castle for herself on the side of a mountain, leaving it up to little sister to later beg her for a return to warmer times. 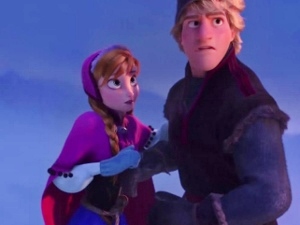 So, let’s hear it for girl power. There are two romantic interests for Anna on her quest, but the dudes are largely incidental — it’s the love between sisters that holds the story together and sets things right in the end, which is far more compelling than watching some dame take a nap until her prince sees fit to plant one on her. But Frozen‘s not a chick flick, either. Leading man Hans (voiced by Jonathan Groff) is a reindeer-whispering hunk who plays Cary Grant to Anna’s Katharine Hepburn. Both Frozen and Tangled really do remind me of great old screwball comedies from the ’40s, the kind where you know the characters love each other by how much they fight and argue. For some reason, Disney films are the only way I can stomach romantic comedy these days. I guess I can buy infatuation and love-at-first-sight much more easily when song, dance, and mythic storytelling are at work.

I love that the distinct Disney style hasn’t suffered from the leap to computer animation.

And we’re not just talking a couple of songs — this is a full-blown, unabashed Broadway musical courtesy of the husband-and-wife duo of Robert Lopez and Kristen Anderson-Lopez (Avenue Q, The Book of Mormon). There was a time when I wanted nothing more than to banish musical numbers from animated films, but those were especially dark years (Disney’s The Hunchback of Notre Dame and Hercules comes to mind). Frozen may not be a return to the once-in-a-lifetime splendor of Howard Ashman and Alan Menken’s work on The Little Mermaid and Beauty and the Beast, but it’s more than tolerable — and I actually still have a couple of the tunes still in my head. The songs further the storytelling, enhance the character identification, and even provide a little comic relief. (The influence of Ashman is undeniable.)

While I normally applaud innovation and originality, there is always something to be said for returning to a simple fairy tale and telling it well. I was surprised how much I liked Tangled and I’m again surprised with Frozen. It has all the character, emotion, spectacle, fun, and artistic achievement that I look for, not just in animation, but in all kinds of movies. It’s old-fashioned storytelling that works.

Cute sidekick characters? Yep, they’re in there. But you know what? I like ’em.