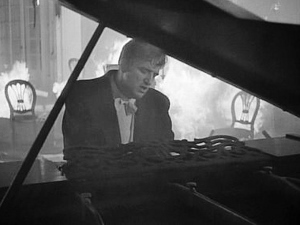 A composer suffers from frequent black-outs and begins to wonder if he’s not responsible for a series of murdered women in the area. Hangover Square is a very good dark drama featuring a great performance by Laird Cregar. Some say this movie is a remake of 1944’s The Lodger (also starring Cregar), which is in turn a remake of Alfred Hitchcock’s 1927 film The Lodger: A Story of the London Fog. But it’s really just a similar concept, not a direct remake. This movie is even slightly better than The Lodger — it has the same exquisite photography and top-notch direction (both films were directed by John Brahm), but I like the characterization of the villain better this time around. The score is by Bernard Herrmann, who contributes immeasurably to the overall impact of the film, especially during the final 10-minute ‘concerto macabre’, where Cregar finishes his concerto while the building literally burns down around him. Love the ending. Also loved the bonfire sequence — pretty sinister fare. With George Sanders.