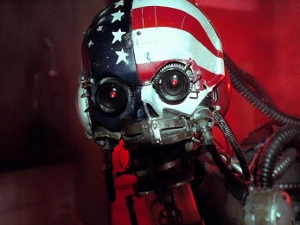 Hardware is a stylish, low-budget British sci-fi film about a man, a woman, and a deadly robot. It’s hard to shake memories of The Terminator, even though the tone of the piece is quite different. There are some interesting sexual overtones at play. Before the droid goes on the rampage, it watches the human couple (Dylan McDermott and Stacey Travis) making love. Later, when the machine has Travis pinned to the ground, it attempts to give her its own kind of loving. (Is that a large drill bit, or are you just happy to see me?) I liked McDermott and Travis. They’re both pretty to look at, and Travis can whoop ass almost as well as Linda Hamilton. William Hootkins is also good as a nasty voyeur who watches Travis through his telescope night and day. The movie’s main problem, aside from Terminator comparisons, is its limited resources. The bulk of the movie takes place in one small set, and while I’m all for claustrophobic scenarios, this one needed opened up a bit. The animatronic robot isn’t very convincing or memorable, either. With Iggy Pop. Directed by Richard Stanley.