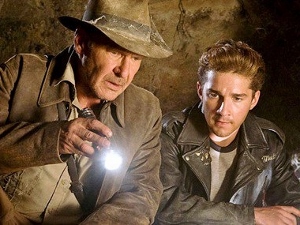 This belated sequel gets by, for the most part, on good will and fond memories of the previous three installments. It’s light on memorable action scenes and heavy on silliness (the CGI mokeys and gophers are really, really hard to shake). What I really wanted were more special moments between Harrison Ford and Karen Allen. I mean, who didn’t always want to see Indy and Marion Ravenwood back together again? The movie fails to make the most of this opportunity, instead serving up an abundance of time between Ford and young Shia LaBeouf, who I’m afraid just isn’t up to the task of playing second-fiddle in an Indy adventure. The crystal skeleton creatures that feature in the third act are beautiful to look at, but their meaning and importance are muddled, contrived, and anti-climactic. With John Hurt, Cate Blanchett, and Jim Broadbent.