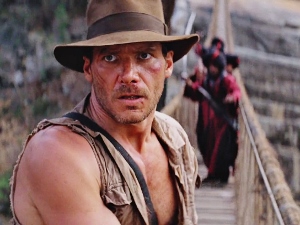 It may not be as clever or well-crafted as its predecessor, but the first Indy Jones sequel (which is technically a prequel) is still loads of fun. In place of the Nazis, we get a blood-drinking Indian cult, and in place of a tough-as-nails heroine who can hold her own, we get a blonde screaming mess. Temple of Doom is both darker and cornier than Raiders of the Lost Ark, and the change in tone may be offensive to some. Me? I dig it. It feels like an old EC horror comic come to life. Ke Huy Quan, as Short Round, is a welcome addition to the cast. Kate Capshaw’s character can grate on the nerves, but you’d scream, too, if you were fed snakes and had your heart ripped out before being lowered into a hot pit. I like how the three protagonists resemble a surrogate family, which softens Indy’s rogue qualities and makes him more of a role model. There are plenty of memorable action sequences, a healthy sense of humor, and another incredible score by John Williams. While Raiders is definitely a better film, I must say I am often more inclined to pop in Temple of Doom on rainy days. It probably has something to do with the fact that I was ten years old when the movie was released. When you’re a ten year-old boy, it’s hard to beat chilled monkey brains and live human sacrifices.