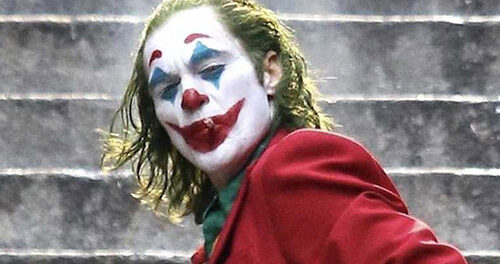 On its surface, Joker is an origin story about Batman’s arch-nemesis. So at first glance, you might mistake it for ‘just another superhero’ movie. But writer/director Todd Phillips and actor Joaquin Phoenix have actually made a film that transcends the comic book genre. Joker works as a disturbing character study, an all-too timely allegory, and a provocative meditation on a theme — something we haven’t seen too often from a major studio release, at least not since Taxi Driver or Network.

Phoenix plays Arthur Fleck, a socially awkward man who gets bent over the barrel by fate in more ways than one. Joker spends half its run-time in a slow burn downward spiral. We see Fleck lose his job, get beaten up by bullies, have embarrassing interactions with women, lose his access to prescription drugs, discover painful lies, and suffer equally painful revelations. My one major criticism of the film is that it basically has an ‘everything and the kitchen sink’ approach to justifying how Fleck becomes the Joker. Really, any two or three reasons presented should suffice!

The film impressed me in two major ways. Once Fleck turns to the dark side, Joker turns into a ripe, volatile allegory. It reminds us to be cautious about how we treat the least of us, the most vulnerable — because pain and indifference make people feel invisible — desperate. And desperate people are vulnerable to taking the hand of whomever reaches down to them first. And that person might not have the best of intentions. Joker will be excellent college essay fodder for those watching it through the lens of Trumpism or white male malaise.

Before the allegorical and cautionary aspects of the film fall into place, I felt well ahead of Phillips’ and Scott Silver’s screenplay (again, how many reasons do you need give this guy to lose his shit and go full-blown villain?) But Joker is never boring because Joaquin Phoenix keeps you glued to the screen in what is sure to be an Oscar-nominated performance. Phillips gives Phoenix several opportunities to act without saying anything. In these moments, we fall into the actor’s eyes and land straight in the character’s psyche. In one early scene, Phoenix is simply laughing… or is he crying? It’s hard to tell, and becomes deeply unsettling. In other moments, Phoenix commands the screen with odd, slow-forming dance moves — a physical manifestation of his confidence overpowering his shame. Needless to say, you won’t forget Phoenix’s work in this movie. It’s one of the great performances of the decade.

The film also features a welcome supporting turn from Robert DeNiro, as a Johnny Carson-esque talk show host that Arthur Fleck admires and fantasizes about. Lawrence Sher’s cinematography is often marvelous, and director Phillips — previously known for comedies like The Hangover or Old School — proves he’s got some serious dramatic chops.