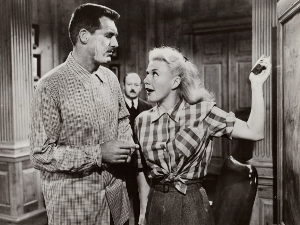 The ever-versatile Howard Hawks (Rio Bravo, Bringing Up Baby) returns to screwball comedy with Monkey Business, pairing Cary Grant with Ginger Rogers as a couple whose marriage is put to the test when they take a ‘fountain of youth’ potion that regresses them to teenaged states of mind. Grant and Rogers have definite chemistry and do hilariously well here, especially when they begin behaving impetuously under the influence of the potion. Marilyn Monroe makes a supporting appearance as a dim-witted secretary and Charles Coburn plays the college overseer eager to sell the potion to the highest bidder. The film never reaches the zany heights of Bringing Up Baby, but the third act certainly comes close — with Rogers clutching a mysterious baby she believes to be Grant’s character, and Grant rallying neighborhood children to help him scalp a man.