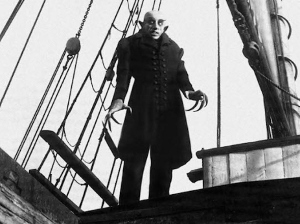 Of the handful of silent films that still have shelf life, Nosferatu is perhaps the most popular. It’s the cornerstone of the entire horror genre, as well as the first time audiences ever saw a vampire on film. It’s an adaptation of Bram Stoker’s Dracula, but for legal reasons, the character names have been changed. The pacing, like most silent films, requires a little patience, but F.W. Murnau was a visualist ahead of his time. His clever use of shadow, combined with Max Schreck’s super creepy performance, make for some indelible imagery.