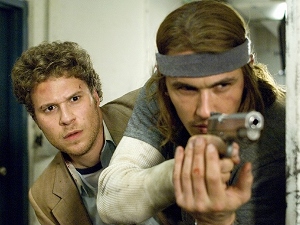 Pineapple Express is Quentin Tarantino meets Cheech and Chong, a hyperviolent action flick crashed into a buddy comedy. The mish-mash may be an acquired taste, but it’s a winning combination for me. Seth Rogen and James Franco carry this movie to victory as a process server and pot dealer on the run from a hitman (Gary Cole) and a crooked cop (Rosie Perez). Rogen is always brilliant, especially when he’s screaming like a muppet, but Franco shows a heretofore unseen side of himself. He’s disarmingly sweet and effortlessly hilarious in a role for which he earned several nominations and awards. Butting in and making this a comic threesome is Danny McBride, who plays Franco’s pot supplier. McBride has his own, distinct brand of self-deprecating humor, fueled by the fact that he’s literally bleeding to death through half the movie. With Craig Robinson; directed by David Gordon Green.