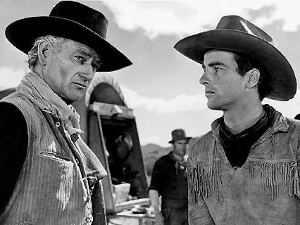 John Wayne stars in this Howard Hawks western about a tyrannical cattle farmer who invests over a decade of work into the mother of all cattle drives, only to have it threatened when his adopted son — played by Montgomery Clift — launches a mutiny against him. I always love to see Howard Hawks playing with gender roles and male archetypes, and Red River is no exception, filled to the brim with so much father/son subtext it’s about to explode. The wonderful thing about the relationship between Wayne and Clift here is that it is largely unspoken, just like the relationships so many men have with each other. When it’s finally forced to a dramatic conclusion (by a female character no less), all your suspicions are confirmed. Anger, love, fathers and sons, men. Hawks is some good shit. Rio Bravo is still the one to beat, though. With Walter Brennan and Harry Carey.