Director Sydney Lumet sets the gritty streets of New York aside temporarily and gives us an emotionally stirring family drama about two parents who have to uproot their family every time the feds catch scent of their trail. If they ever get too comfortable, they run the risk of being locked away for an act of protest that accidentally ended in a fatality during the turbulent '60s. The family's vagabond routine is put to the ultimate test when the eldest son, played by River Phoenix in an Oscar-nominated performance, comes of age and wants to attend music school. But if he leaves the family, he may never see them again. Running on Empty is an incredibly moving story about family bonds -- both suffocating and empowering -- and how loving someone sometimes means letting them go. 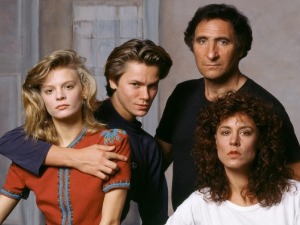 Anyone interested in acting as a profession needs to watch the incredible performances by Judd Hirsch, Christine Lahti, and River Phoenix in this film. Screenwriter Naomi Foner (Jake and Maggie Gyllenhaal’s real life mama) gives the ensemble dynamic roles full of conflict and subtlety, and the cast delivers performances that haunt me to this day. The scene where Lahti has a clandestine meeting with her disapproving father to ask for help is especially heartbreaking, and the budding romance between Phoenix and his first love (Martha Plimpton) is handled without the sap and superficiality of so many other ’80s movies.

Lumet brings his trademark realism to the film, banishing the pointed dialogue and indulgent underscoring that usually mar good dramas. The film unfolds believably in this minimalist approach, anchored firmly to the shoulders of its screenwriter and cast. The only stylistic embellishment is a welcome one, the incorporation of James Taylor’s “Fire and Rain.”

In addition to Phoenix’s Oscar nod, Foner was also nominated for Best Original Screenplay. Hirsch, Lathi, and Lumet were robbed.