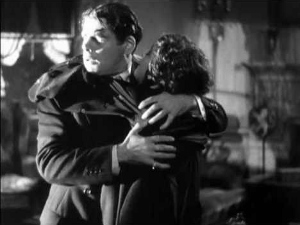 Paul Muni plays a thinly-veiled version of Al Capone in Howard Hawks’ Scarface, a grim, violent gangster flick that was pretty controversial for its time. The lack of bloodshed keeps it tame by today’s standards, but myriad onscreen deaths and an immoral leading character delayed the release of Scarface until two years after it was filmed. Muni is reliably good (he’s an Oscar-winner for The Story of Louis Pasteur with five other nominations under his belt), and the supporting cast is pretty good, too — especially Vince Barnett as Muni’s idiot secretary and Boris Karloff as one of the heavies. The film picks up steam as it goes — the last fifteen minutes, when Muni is holed up in his apartment shooting at the police on the streets, are the darkest and the best.