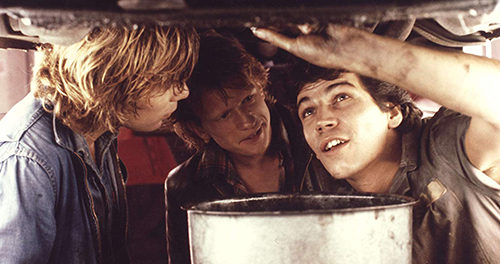 Paul Verhoeven (Soldier of Orange, RoboCop) brings his devil-may-care attitude toward sex and morality to this slice-of-life story about three young Dutch boys who dream of escaping their restrained provincial lives by winning motor cross competitions. One of the boys, Rien (Hans van Tongeren), has a real chance of unseating the current champion (Rutger Hauer), while Eef (Toon Agterberg) struggles with his sexual identity in dark ways, and Hans (Maarten Spanjer) tries to win over a young woman (Renée Soutendijk) who works a french fry truck with her brother.

Spetters reminded me a little of American Graffiti and Breaking Away, as it follows multiple storylines that weave together, all of which are unified by a sense of community and a local event that the movie builds to. Verhoeven always plays with tone, so Spetters will jump from comedic sexual encounters to tragic accidents and scenes of abuse, but the overall impact of the film is a bit grim — appropriately so. The boys’ dreams can’t possibly be met, so all three have to come to terms with that disappointment in their own way. Those decisions take them to very different places by the film’s end.

Hans and Rien have more, let’s say ‘traditional’, resolutions. It’s the Eef character that most interests me in Spetters, particularly for a movie from 1980. Eef wrestles with gay desire while simultaneously preying on gay hustlers, robbing them after they’ve serviced a client. At one point, Eef is gang-raped in retaliation, and ends up having a conversation with one of his attackers about his gay feelings. Beyond that un-politically correct moment is yet another. Eef ultimately decides to stay in his home town and learn boxing… so he can pulverize the puritanical father whose beaten him for years.

Paul Verhoeven is about extremes, and the extreme always seems to make an impression. But if you don’t shy away from any sort of content or imagery — if thoughts don’t scare you — then Verhoeven isn’t shocking at all. He’s honest and direct. Sure, sometimes his films turn out more exploitative than thoughtful. But during the time he’s been making movies, he has been one of the most progressive voices and fearless filmmakers out there. And I love that about him.