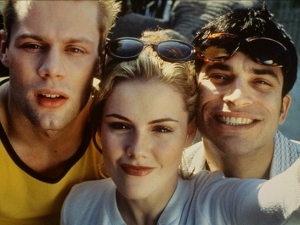 A young woman (Kathleen Robertson) starts dating two different men, a writer and a drummer (Johnathon Schaech and Matt Keeslar), and can’t give one up, so she invites them to be a threesome. And it works until she falls in love with a third man (Eric Mabius) who has more money and a more promising future. Splendor wants you to fall in love with the woman’s happy-go-lucky, naive, oops-I-did-it-again attitude, but she just infuriated me. But even if Splendor weren’t an expose on the cruel coyness of heterosexual women, it still wouldn’t quite work for me. The threesome is a gimmick that isn’t founded in any real character or motivation — it’s introduced, played out, and treated as a joke through the entire movie. A little more sincerity might have solidified it for me, but then I’d still have a sadistic woman yanking not one, not two, but three men’s chains and all of them completely willing to let her do it. This is why I hate John Cusack movies, people. Are heterosexual men really this masochistic? Do heterosexual women truly have every ounce of influence and power in sexual realtionships? So glad I’m gay. And so’s the writer/director here, Gregg Araki (The Doom Generation, Kaboom), so at least the boys are pretty to look at.