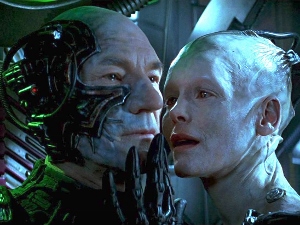 This is the best of the Next Generation films, in large part because it deals with one of Star Trek‘s most formidable foes, the Borg. The movie also incorporates a subplot involving warp drive inventor Zephram Cochran (James Cromwell) and the pivotal moment in human history when we made first contact with an alien species. Yes, First Contact dabbles in time travel, something the Next Gen crew can’t seem to leave alone. Fortunately, First Contact is good enough to overcome its reliance on the tired plot device.

Captain Picard (Patrick Stewart), motivated by his traumatic history with the Borg, is put to particularly good use this time. He becomes a man possessed, determined to stand his ground, no matter the cost, until the Borg are obliterated once and for all. Data (Brent Spiner) also gets ample screen time, captured and teased by the Borg Queen, played with cool reserve by the beguiling Alice Krige. The rest of the crew get much less screen time, but they make it count. My favorite scene is the one where Riker (Jonathan Frakes) finds Troi (Marina Sirtis) drunk. The icing on the cake is Jerry Goldsmith’s main theme, which perfectly embodies the nobility of Gene Roddenberry’s vision of a better tomorrow. Directed by Jonathan Frakes and co-starring Alfre Woodard.