Sinbad must rescue his wife-to-be from the clutches of an evil sorcerer who takes her away to an island full of dangerous monsters in this ebullient fantasy adventure from director Nathan Juran and pioneering effects artist Ray Harryhausen. Harryhausen's stop-motion animation combine with Bernard Herrmann's music to give this romantic adventure wings. You can see and hear the passions of both men in the film, and these achievements pretty much make The 7th Voyage of Sinbad what it is:  sweet, charming, escapist fare for the whole family. 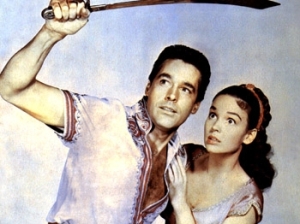 The cast does a good job with some of the clunkiest dialogue in movie history.  Kerwin Mathews is the most handsome and charismatic Sinbad of all the Harryhausen adventures, while Kathryn Grant and Torin Thatcher do commendable jobs embodying the stereotypical princess and sorcerer roles.  And when I talk about the acting, I need to include Harryhausen’s performances as well.  Even though he’s animating monsters, he always manages to make us feel for them, and 7th Voyage‘s Cyclops and Dragon are good cases in point.

I’m not a fan of the snake woman depicted early in the film, but the climactic sword fight with the skeletal warrior is the best-staged use of stop-motion animation I’ve ever seen.