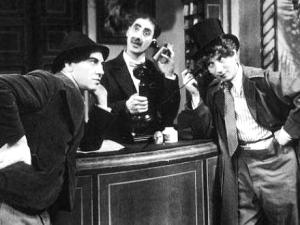 The Marx Brothers made their feature film debut with The Cocoanuts, a filmed version of their popular vaudeville act of the same name. The scenario is centered around a Florida hotel where the brothers try to swindle people in a real estate auction, complicate a jewelry theft, and facilitate a wedding. Highlights include Groucho and Chico’s “why a duck” routine and Harpo’s bizarre craving for ink and telephone. Some of the gags mustered a half-smile, but they’re too few and far between — especially when the movie opts to focus on a pair of young lovers (Oscar Shaw and Mary Eaton) instead of the Brothers. I also don’t care for the sporadic Irving Berlin numbers and gratuitous dance numbers. It’s hard to believe society once reveled at watching women line up and kick their feet in the air, but it was apparently all the rage back in the roaring ’20s.