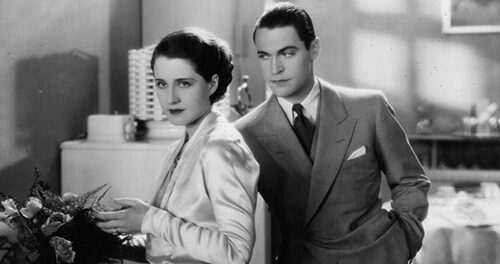 Norma Shearer, ‘the First Lady of MGM,’ won her Academy Award for The Divorcee. Shearer plays against Chester Morris, happily married until she discovers Morris had a fling with a floozy a few months in the past. While he’s away on a work trip, her despair sees her into the arms of another man. When the couple try to reconcile their indiscretions with each other, Morris is unable to do so. Exasperated by the double standard, Shearer embarks on an international adventure to explore her slutting potential.

For a flick from the early ’30s, you can expect a little over-acting. Shearer gets some nice moments of wordless subtlety, though. The third act targets a quick, less than satisfying reconciliation between our two lovers. But The Divorcee is a polished production with a few cute moments, including co-star Robert Montgomery’s convincing imitation of an organ grinder’s monkey, and Shearer’s direct-to-camera and not-too-subtle ‘I’m going to be a slut now’ face.