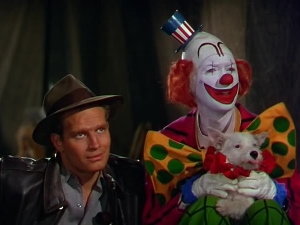 Charlton Heston headlines an ensemble cast in Cecil B. DeMille’s The Greatest Show on Earth. We’re talking, of course, about the Circus — and the lives of the people who put it on. Heston plays the owner and manager of the sprawling, traveling outfit. Betty Hutton is the love interest he has no time for, while Cornel Wilde plays the hunky trapeze artist who joins the troupe for a season and threatens to steal Hutton away from Heston. There’s also James Stewart as a clown hiding from the feds and Gloria Grahame as an elephant performer vying for Heston or Wilde’s affections. For the bulk of its two and one-half hour run time, the movie flits back and forth from character drama to show-stopping spectacle, nearly wearing out its welcome before the climactic third act pulls the movie’s butt out of the fire. Prior to the third act, the stakes center primarily around whether or not one of the trapeze artists will fall to their deaths. But the third act is what the movie is most famous for, with its big train crash sequence that culminates in a near-death experience that sets all the romantic entanglements straight. It’s not one of the best Oscar-winning Best Pictures, but if you can wade through the pageantry, clunky narration, and hammy acting (mostly from the ever-awful Heston), there’s a nugget of sincerity that glows like an ember and finally catches flame near the end.