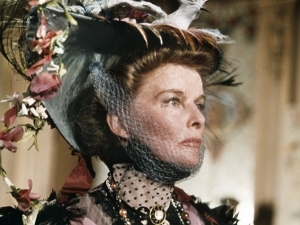 Katharine Hepburn stars in this odd duck of a movie about an eccentric Countess who catches wind of a conspiracy to destroy Paris in the name of oil drilling and decides to take matters into her own hands… by killing all the men involved. Director Bryan Forbes (The Stepford Wives) is completely aware of the story’s intrinsic absurdity, executing key moments with touches of whimsy and musicality. But he’s equally aware of the potent subtext at work in Jean Giraudoux’s play — the struggle between good and evil transposed against the inherent greed of capitalism. He lets Hepburn do the heavy lifting where that is concerned.

Hepburn feels out of sorts at times, trying perhaps too hard to be wacky. But she excels in two key moments in the film, when her character — someone who dresses, talks, and acts like someone from several decades prior — is confronted with the realities of modern times. She comes to realize she’s been living in a happy bubble. And the men who want to drill for oil come to represent the dark side of progress — anonymous, dehumanizing, selfish, cruel ‘progress’. Yes, The Madwoman of Chaillot is preachy. But if anyone can sell heavy-handed allegory in a quasi-fantasy about politics, Hepburn can. (Did I mention this is a really weird movie?)

Yul Brynner is fun in the ham-handed role of the lead bad guy, someone who treats wait staff and commoners with great contempt. Donald Pleasence is eerie as the cool, confident master-mind of the oil plan. Charles Boyer, Paul Henreid, Oskar Homolka, and John Gavin round out the conspirators, playing a Broker, a General, a Commissar, and a Reverend, respectively. Richard Chamberlain and Nanette Newman play young lovers the Countess is trying to bring together, and the Countess’ daffy circle of like-minded ladies includes Giulietta Masina, Margaret Leighton, and Dame Edith Evans. Danny Kaye gives a Oscar-calibre supporting performance as a character called the Ragpicker. He is the one who compassionately breaks the Countess’ bubble, and delivers one hell of a monologue in the third act.

The Madwoman of Chaillot is weird, uneven, clunky, and pretentious — and I doubt it will come together for most people. But it’s also beautiful and emotional at times. I guess I don’t mind a wobbly execution as long as the core of the thing feels honest and true.