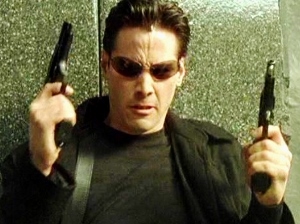 A man slowly discovers that reality is not what it seems and that we are all actually slaves to more advanced technological organisms in this uber-cool, groundbreaking sci-fi flick with an incredible screenplay and visionary aesthetics. There is a place in cinema for Keanu Reeves, and it is The Matrix. (Who knew?) Carrie-Anne Moss and Laurence Fishburne steal the show, both playing walking talking incarnations of bad-ass. Hugo Weaving is supremely spooky as Agent Smith. Don Davis’ music score is both ominous and soaring. The Wachowski brothers prove to be masters of action choreography, aided by Bill Pope’s scrumptious cinematography. But it’s the script that amazes me most of all. The tightly-wound opening 30 minutes is a master class in how to dole out exposition. The pacing is slick. The last 50 minutes are relentlessly entertaining. In the genre of sci-fi, few movies top this one.