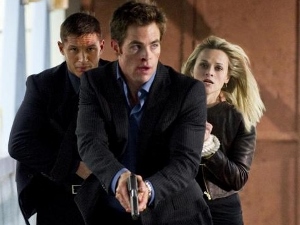 Chris Pine, Tom Hardy, and Reese Witherspoon star in this McG-directed comedy-action flick about two CIA guys who find themselves competing for the same woman’s affections. The script is born of stale formula, but the plot is kept out of the way enough for the personalities to breathe free. The result is a good star vehicle for its two leading men, but not so much for Witherspoon, whose character is in the dark about the fact that her two suitors know each other and are playing a game. What I liked most about the movie are earlier scenes in which all three principle characters toy with the idea of dating. Witherspoon and Pine are so wrapped up in their careers, they aren’t really wanting for a relationship. But Hardy’s character is nervously interested in something more. None of the characters are depicted as castrated, inexplicably lovesick John Cusack types from an insufferable John Cusack movie. That alone is cause for some celebration. Angela Bassett’s tremendous talent is wasted as the guys’ CIA boss, but Chelsea Handler turns in a most welcome supporting performance as Witherspoon’s bad-girl best friend. With Rosemary Harris.