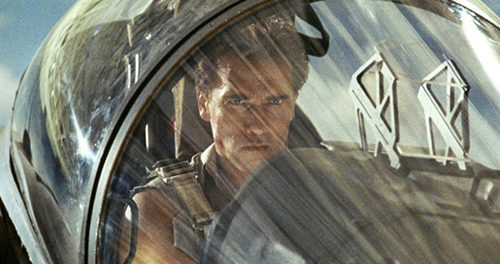 Director James Cameron (Terminator, The Abyss) re-teams with Arnold Schwarzenegger to bring this action comedy to the big screen. Arnold plays a married man who keeps his occupation a secret from his wife, played by Jamie Lee Curtis. What Curtis doesn’t know is that he’s not really a computer sales person. He’s actually a spy for a secret government agency. When Arnold learns Curtis might be cheating on him, he uses his high-tech surveillance skills to spy on her. In a roundabout way, it brings husband and wife closer together, just in time for a big explodey-type finale with terrorists who have nuclear warheads ready to blow up American cities.

The action set-pieces in True Lies are pretty solid ones, including an air & road chase along the Florida Keys Overseas Highway and a horse & motorcycle chase through a storied hotel. But what sets True Lies a little bit above the other action flicks for me is its sense of humor. While the first and third acts are action-packed, the second act is like a romantic comedy, primarily centered around Arnold’s paranoia about Curtis’ infidelity and Curtis’ interactions with the interloper, played by a delightfully smarmy Bill Paxton. The departure in tone makes it almost feel like a different movie, but it’s actually the heart and anchor of the whole piece. Tom Arnold is put to good use as Arnold’s right-hand man, and Cameron is keen to interject sight gags and one-liners even when the action is at its most tense. It plays a lot like a Roger Moore James Bond movie — entirely self aware, and just there to make some fun. And it does.