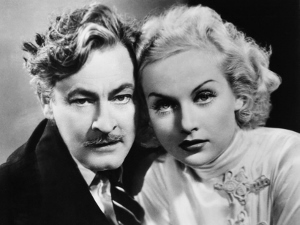 A floundering Broadway director ingratiates himself to an old flame in order to rekindle his career in Twentieth Century. This film is often regarded as the grandfather of screwball comedy, one of my favorite genres. John Barrymore and Carole Lombard give remarkably madcap performances as the theatre director and his ingenue, but these aren’t charming or likeable characters. I don’t always have to like the characters in movies, but this movie is entirely about two self-absorbed people’s struggle for attention and I had a hard time investing in it. I’m glad this movie got Howard Hawks started in the genre, though. With more likeable characters (and a bit less overacting), he would later direct two of my favorite screwball flicks, Bringing Up Baby and His Girl Friday.