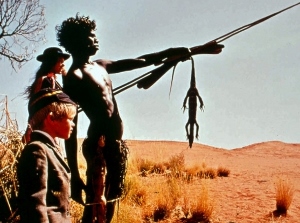 A teenaged girl (Jenny Agutter) and her little brother (Luc Roeg) are stranded in the Australian Outback after their father begins shooting at them, catches the car on fire, and blows his brains out. They manage to survive for a few days, but ultimately come to rely on a young aborigine (David Gulpilil) who crosses their path. The boy is on ‘walkabout,’ a rite of passage in which he must endure the Outback and provide for himself for a period of time before returning to his people.

Walkabout is a narrative film that isn’t afraid to experiment and dive into moments of tone poetry. It’s rare to find such an emotionally grounded film that also pushes the limits of what cinema can express in formal and symbolic ways. On the surface, it’s merely a story of survival. But without ever declaring so in any obvious manner, it’s also a coming-of-age story about the loss of innocence, a subtle look at sexual awakening, and a political statement against urban sprawl. The beautiful thing about the movie is that it’s really whatever you want to make of it.

I enjoyed director Nicolas Roeg’s beautiful cinematography, avant-garde cutting, and inventive use of sound. I also loved the fact that the desert environment was both beautifully inviting and deadly terrifying — like some sort of dreamland. The three leads all exhibit raw talent and are intriguing to watch together. The film has that ‘surrogate family’ vibe going on that I’m rather fond of, and also serves as another reminder to all of us that it’s not the destination that matters — it’s the journey.

I get the feeling Walkabout is one of those films I haven’t come close to fully processing, and that it will continue to pick up added meaning for me with every viewing. In my book, that’s a treasure.