Warren Beatty and Faye Dunaway star as the legendary real-life bank robbers in Arthur Penn's volatile Bonnie and Clyde. With its anti-hero point of view and graphic violence, this film helped lead the charge for grittier, more realistic fare that cropped up throughout the '70s. While the film certainly sensationalizes the criminals, it also humanizes them. It's easy to see how a bored waitress like Bonnie Parker would fall for a handsome bad boy like Clyde Barrow (I mean, who wouldn't get in a car with smoking-hot Warren Beatty?) And since the two only robbed banks, they became folk heroes to a working class destroyed by foreclosures. I also like that the film suggests Clyde is impotent. It's refreshing to see a tough guy with flaws and foibles, and it also makes the romantic relationship more interesting than most. 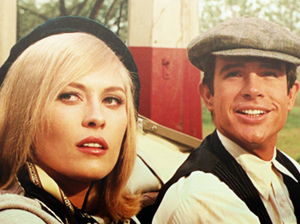 Beatty and Dunaway are charismatic in the leads, but they’re almost upstaged at times by their co-stars. Gene Hackman plays Clyde’s gregarious brother-in-law and Estelle Parsons plays his shrill wife, a part that lends itself to a few moments of absurd comedy. A young gas station attendant played by Michael J. Pollard also joins the gang. He’s a kid with stars in his eyes whose part gets even more interesting once his hillbilly father (Dub Taylor) enters the picture.

Near the end of the film, Bonnie writes and recites to Clyde an original poem about their adventures together. Her writing portends their deaths, and as the film progresses to its finale, you get the impression that Bonnie and Clyde know the writing’s on the wall. When it finally happens, it’s one of the most famous and brutal death scenes in movie history. As their bodies convulse, riddled with what seems like hundreds of bullets, it’s not the visceral indulgence that leaves the greatest impact. It’s the fact that we identified with these “bad,” imperfect, beautiful people who loved each other.

The film won Oscars for best cinematography and supporting actress (Parsons). Beatty, Dunaway, Hackman, and Pollard were all nominated for their performances, and the film also received nominations for best picture, director, screenplay, and costume design.