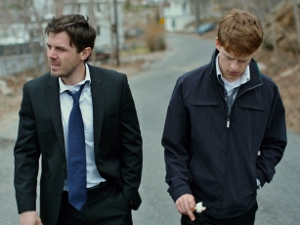 Not since 1980’s Ordinary People have we had such a genuinely affecting movie about loss and mourning. In Manchester by the Sea, a man with a tortured past discovers he is the legal guardian of his late brother’s teenaged son. Casey Affleck is remarkable and nuanced in the lead role, playing a character who has repressed his feelings for so long that the mere spectre of an emotion sends his whole world into free-fall. At first, you may wonder why he’s so uptight and reluctant to care for his nephew. But before the midpoint of Manchester by the Sea, you’ll learn why. My God, you will learn.

In lesser hands, a movie like this would be just like any other on the Lifetime Movie Network. But writer/director Kenneth Lonergan (You Can Count on Me) doesn’t sentimentalize or sensationalize the material. Instead, he takes what is an intrinsically overwrought concept and tackles it with the utmost sincerity. The result is a film you can cry at without feeling easily manipulated. Lonergan also creates a beautiful sense of place with the oceanside New England setting and uses non-linear flashback storytelling to powerful effect.

Lucas Hedges delivers a terrific supporting performance as the teenaged son and Michelle Williams makes a dramatic impact on the film with just a few scenes worth of screen time. The last scene she has with Affleck is probably one of the most emotionally charged scenes in recent movie history. There aren’t many times you can watch a scene like that and feel equally heart-broken for each of the characters. Manchester by the Sea is powerful stuff, a display of amazing acting prowess. With Kyle Chandler and Matthew Broderick.