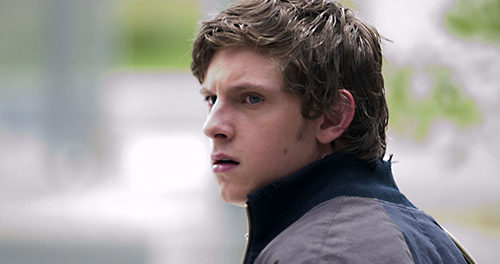 Jamie Bell (Billy Elliott) leads an all-star ensemble in this surreal, satiric look at the breakdown of suburban existence. The Chumscrubber is an ambitious conceptual piece, not unlike American Beauty in tone and style. But where American Beauty centered on one character’s shaky morality and lost me, The Chumscrubber stems more confidently from one of my favorite thematic tropes — human beings’ desperate need to connect meaningfully with one another.

Bell plays an over-medicated teenager who has just lost his best friend to suicide. Since the best friend was also one of the school’s biggest pill dealers, Bell is blackmailed into finding and delivering the deceased’s pill stash, or else a kidnapped kid will be killed. Most of the adult characters in The Chumbscrubber are clueless and aloof, while the teenagers are left to fend for themselves in a world of drugs, immorality, and potential violence. Prescription drugs play a huge role in the film. Nearly every character is on pills or seemingly in need of them. I think one of the most meaningful ways to interpret The Chumscrubber might be as a pastiche on the pharmaceutical numbing of America, with many of the primary characters in the film using drugs to keep themselves from having to deal with their emotions… or each other.

Jamie Bell and Glenn Close’s characters are at the heart of the story. Close plays the mother of the recently deceased and you get the idea early in the film that neither she nor Bell are processing the tragedy very well. First-time director Ari Posen uses a powerfully surreal image to convey their isolation. Bell pops a pill and looks outside his bedroom window to see Close digging in her flower garden at night. He then crawls into his bed and goes fetal as the camera dollies back to reveal Close, now digging in Bell’s bedroom. Digging and digging and digging. It’s a beautiful way of indicating to the audience that while all the other supporting characters have their issues, these are the two characters to watch and to hope for.

The film delivers on the promise of that grace note. The third act of the film teeters between comedy and violence (which would be cute if it weren’t exactly like real life), and out of that tension, comes the climactic emotional release of the film — a powerhouse scene between Bell and Close that is straight, honest, and sincere — unlike any other scene in the movie.

If I’ve made this film sound heavy, believe me when I say it’s not. It’s mostly a comedy. But the dramatic aspects are what resonated with me. I’ve described the main story line, but there’s a lot more going on in the film with a roster of amazing talent I haven’t even mentioned: Allison Janney, Ralph Fiennes, Carrie Ann Moss, John Heard, Justin Chatwin, Rita Wilson, Lauren Holly, William Fichtner, and Rory Culkin are the most notable. James Horner’s sparse, piano and guitar-driven score is perfect for the film’s pervasive black comedy and occasional introspective moments.