Harper Lee's Pulitzer Prize-winning novel is lovingly adapted to film by director Robert Mulligan, screenwriter Horton Foote, and producer Alan J. Pakula. Gregory Peck earned the Best Actor Oscar for his portrayal of Atticus Finch, a lawyer of uncompromising morals who puts the safety of his family on the line to defend Tom Robinson (Brock Peters), a black man accused of raping a white woman. Finch is also a widower, raising his two young children with the help of his maid Calpurnia (Estelle Evans). The narrative is made a coming-of-age story through the eyes of Finch's youngest, the feisty Jean Louise -- or Scout (Mary Badham) as she's nicknamed. Scout's perspective on racism is balanced with her own fear and ignorance surrounding a neighbor named Boo Radley (Robert Duvall), who turns out to be her salvation when she and her brother are attacked by a bigot seeking revenge on their father. 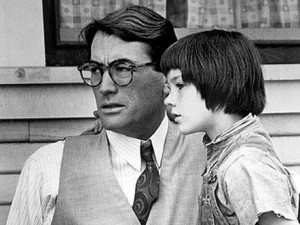 To Kill a Mockingbird‘s heavy subject matter gains strength and increased relevance through a child’s point of view. Badham was Oscar-nominated for her screen debut and forty-one years after the film was released, the American Film Institute declared Atticus Finch the number-one film hero of all time. It was a surprising name to top a list containing Indiana Jones, James Bond, and Superman — but undeniably well chosen. I still get a lump in my throat when the spectators in the segregated section of the courtroom silently stand for the beleaguered Finch. “Jean Louise, stand up,” a minister tells Scout. “Your father’s passing.” Surely one of the finest scenes in American cinema.

In addition to Peck’s Academy Award, the film also won for art direction and adapted screenplay. Elmer Bernstein’s achingly nostalgic score was nominated (have you ever heard more yearning in a film theme before?)  It’s other nominations included Best Picture, Best Director, and Best Cinematography.